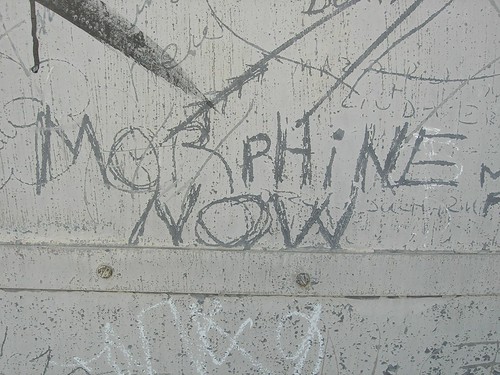 When most people think of back problems they think of “slipped disks” or muscle pain. That's not what has caused my stepbrother Mark's troubles. His official diagnosis is degenerative disk disease. That means exactly what it sounds like—the disks between his vertebrae that are supposed to protect the nerves and bones are slowly deteriorating. The MRI of the area makes it look like he has a broken back: it's full of jagged discontinuities; the bones in his back are pushing straight into his nerves.

This is what has led to his disability. He has trouble walking, sitting, sleeping, doing almost any activity for any length of time—not to mention living with excruciating pain. In addition, he has arthritis in his feet that has become increasingly burdensome and painful in its own right. As I mentioned in my last column, he's finally receiving some disability payments from the government, but they are barely enough to survive on. Still, the Social Security Administration requires regular visits to a doctor to confirm that the disabling condition persists. A recurring feature of Mark's doctor visits is a urine test. There's nothing about the treatment of his back problems or arthritis that actually requires a urine sample; the test is for drugs. No, Mark's not some kind of recovering drug addict. His doctor is obligated by the government to make sure he's taking his pain medication and not selling it for profit.

The same medications that, for Mark, offer a tiny respite from debilitating pain, are also highly sought-after and addictive recreational drugs. Each morning, Mark takes three 10-milligram tablets of methadone (the largest dosage available) and one 15-milligram dose of morphine sulfate. Three more times each day he takes two more methadones and another morphine sulfate. He's been offered $10 a pill, but he's never sold even one, even though a week's worth would be more than his monthly Social Security Disability check.

“You can't stop taking them regularly or they lose their effectiveness,” Mark says. The effects of the drugs, especially the methadone, build gradually and need to be maintained over time.

He's reduced his dosage before, but not because he wanted to become a drug dealer. Sometimes, if he knows a friend or family member is coming for a visit, he'll take a little extra pain medication so that he's able to be more active. Last summer, I was visiting for a month, helping him repair his house. After the first week he revealed to me that he had been taking extra meds the whole time. He was nearly out of painkiller, and it was over a week before he could renew his prescription.

Mark wanted me to just stay away for that next week. He didn't think I'd want to be around him when he was in so much pain. He's described it to me as feeling like long-needle-like shards of glass are penetrating his lower back, hips, and legs. He says he becomes like another, angrier person when he's in pain—a person he doesn't like, someone he doesn't want to inflict upon others. I insisted on staying, even though we didn't get any work done. For me, it was difficult to see much of a change in Mark. He might have been slightly quicker to anger, but he is normally such a mild, sensitive person, that his behavior didn't seem out of the ordinary or inappropriate at all. But I could see that any motion, even getting up to go to the bathroom, was a struggle. Staying immobile was nearly as bad, because when he inevitably did need to move, the pain was worse.

Mark has slowly had to come to grips with the fact that pain medication, for him, is a requirement of everyday life. He's taking dosages that might kill a person who hasn't already built a tolerance. He's taking drugs that, if they weren't acting to mitigate his pain, could produce incredible euphoria, and ultimately, addiction.

And this is part of the problem. Because morphine and methadone are both trendy recreational drugs, the government is extremely wary of doctors overprescribing them. Many doctors simply won't prescribe them, or prescribe them in such low dosages that they don't actually relieve the pain.

When Mark moved to his current town, his first concern was whether he'd be able to find a doctor who was sympathetic to his pain, who'd provide enough medication to give him real relief. Already, one doctor had threatened to stop prescribing the drugs unless Mark got potentially crippling back surgery (he did eventually get the surgery, which helped a bit, but didn't bring him anywhere near a complete recovery).

Washington State, where Mark lives, is currently working on a system to further regulate the very drugs that enable Mark to function. There appears to be some evidence that these dangerous drugs aren't actually effective in large dosages, but what is less clear is what the alternatives are and whether they would be available to Mark. The proposed regulations call for pain management specialists to monitor patients who are being given large dosages of long-acting painkillers like methadone, perhaps reducing dosages or switching them to different treatment regimes. While the regulations may be motivated by real problems such as accidental overdoses, there may not enough pain managers to meet the need.

Doctors then may be forced to choose between reducing dosages and potentially inflicting pain on their patients, or having their licenses revoked. Even without these regulations, one Washington doctor has already lost his license, leaving his patients without access to medication.

Mark's current doctor is urging him to reduce his dosages, by a half-pill a day at first. Will it be possible for Mark to reduce his dosage to low enough levels to escape the new state regulations—without increasing the pain he must live with? It's difficult to say. I've seen how hard it is for him to cope with even a temporary reduction in pain medication. Should we ask people who really need these medications to suffer because others are abusing them? Should states implement drastic medical regulations when it's unclear whether they have the resources to provide alternatives?

All I know is that Mark is in a lot of pain, and even the existing regulations make it difficult for him to get medication that offers some relief.