Are Democrats doomed? Can a ‘Big Tent’ be too big? Christian at OkCupid.com uses stats from the dating site to make the case (via The Browser):

Time and again in American politics, Republicans have voted as a unit to frustrate our disorganized Democratic majority. No matter what's on the table, a few Democrats will peel away from the party core; meanwhile, all Republicans will somehow manage to stay on-message.

Thus, they caucus block us.

Articles noting this phenomenon anecdotally appear all the time, and despite the recent hopeful spate of Democratic victories, it's undeniable that the Republicans form an exceptionally effective opposition party. Today, we're going to perform a data-driven investigation of why this might be—and discover some fascinating things about the American electorate along the way. Our data set for this post is 172,853 people.

I should start off by pointing out that the Left/Right political framework we're usually handed is insufficient for a real discussion, because political identity isn't one-dimensional. For example, many Libertarians have Left-leaning ideas about social policy, and Right-leaning ideas about personal property. Where do they fit on a single ideological line?

There are many methods of looking at the political spectrum, but the best way I've come across is to hold social politics and economic politics separate, and measure a person's views on each in terms of permissiveness vs. restrictiveness on a 2-dimensional plane. Like so: 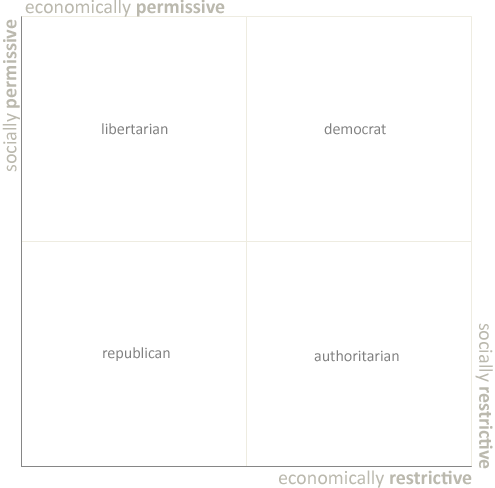 As you can see, I've superimposed some 'party' labels, to add some real-world context. One could quibble with the names I've chosen, but I feel that, in a broad sense, they fit: Democrats have a permissive social outlook and believe in restricting the financial sector (through regulation); Republicans essentially believe the reverse. In their corner, Libertarians would like to end restrictions across the board, and, down in the lower right, we have people who prefer that all aspects of life be guided by some authority: religion, the government, whatever.