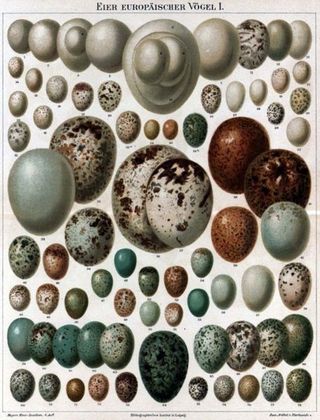 In sixth grade I was made along with my classmates to undertake a project that, we were told, would teach us something about science. Our task was to obtain a large metal coffee can (Folgers or Yuban, most likely), and to obtain an egg (chicken, white), and to find something (anything) of our choice to serve as padding for the egg in the can. Next, at a specified date and time, the principal of Pasadena Elementary School (which was in Sacramento, not in Pasadena), Mr. King, took all the cans up to the top of the school gym and threw them off one by one as the sixth-graders watched from below. Those kids whose eggs remained integral 'won', and those whose eggs broke 'lost'. The lesson had something to do with materials science, or gravity, or some other feature of the physical world whose importance escaped me.

What went into my can? Some flour, some maple syrup, some yogurt, a sock, a dog's chew-toy, some Jell-O, a clump of hair from the bathroom sink, some peanut butter, some celery, some chewed BubbleYum, a bit of bubble wrap, some apple wedges. I would not be surprised to be reminded that I had peed in the can before sealing it up, though I have no recollection of having done so.

I think I wanted the inside of the can to be a sort of microcosm, to duplicate the outer world of qualitative variety and complexity in which eggs thrive. I seem to have believed that if one of the ingredients could not come to the egg's rescue, another surely would, and that that saving ingredient, whether the peanut butter or the sock, needed only to be represented in a token amount. To say that this was a primitive sort of thinking would not be the half of it. It bore obvious affinities to voudun and like practices, but rather than creating a double of some particular person or thing, I wanted nothing less than to bring into being a fetish object of the world itself.

In a sense, this has been my approach to every project I have taken on since, whether creative or scholarly. In the hope of protecting against failure, I throw in everything available. If this footnote doesn't save me, that one will. In the end I want everything, no matter how remotely connected to the topic at hand, to get its mention. I don't think this makes my work bad, in any case I hope it doesn't, though it does obligate me to constantly keep a natural inclination in check.

What stuns me now when I think about this incident is how utterly inflexible personality is, and how consistently a deep, generally invisible pattern is able to determine the way a person performs in seemingly unconnected spheres of life. The recipe I threw together for that can was a rough draft of everything I have ever written. But how can it be that a lump of yogurt placed in a can in 1984 can come from the same place in a person's psyche as does a footnote 26 years later? The answer to this question probably lies somewhere in Spinoza, as the devotion to an everything-in-everything vision of the world leads directly back to Leibniz. With Spinoza, I strive to simply ride out this determined state of affairs, rather than to bemoan it as some sort of malediction, and with Horace I accept that, while you can drive out your own nature with a pitchfork, it always comes roaring back again.

It might be worth mentioning that my egg broke. It didn't just crack. Its yolk had so thoroughly intermingled with the disgusting mass of slop in which I had encased it, one would have thought I had included among my fetish object's many fluids a spoonful of hollandaise. Other boys, who had used nothing but space-age synthetic materials and whose eggs came out whole, were praised as rocket scientists and as future astronauts. They applauded one another heartily, shutting me and my freaky voodoo can out of the post-launch cheer altogether. The girls had wrapped their eggs in silks and cottonballs, and were weeping over their near universal failure to bring them down to earth in one piece. It was as if the poor lasses had confused this science experiment with another one that would come a few years later, in sex ed, when the egg transforms not into an astronaut reentering the earth's atmosphere, but a delicate infant.

Here is what I wish I had done: rather than surrounding the egg with the microcosmic principles of everything, I should have allowed only the principle of the egg itself into the can. I should have filled the can with nothing but eggs (a large Yuban can would probably hold 12-15 of them). Surely not every egg would break in any given toss. I could select one that did not break and call it 'my' egg. This would be a properly philosophical approach, one that the public-school teachers of modest intellect would no doubt try to disqualify. I would have loved to see them contorting themselves to explain why, though I had pulled a whole egg out of my launched can, I had nonetheless not respected the spirit of the assignment. But it took me a full quarter century to come up with this idea, and at this point no one wants to see me throwing anything at all off the roof, no matter how philosophical.

But maybe it's not too late to write a book that would be the intellectual equivalent of an egg-only can? What would that look like, I wonder? How could I even get started?