As you’ve probably heard, there’s a new regime taking over on January 20. And however much appointments like Larry Summers and Robert Gates contradict the Obama brand’s principal selling point, “Change!” (about which LBO can only say, “We told you so!”), it must be admitted that the likely stimulus program looks half decent in both size and content. It’d be nice to see some social spending and redistribution too, but it’s no surprise that this gang isn’t proposing that. Infrastructure spending, green energy, and aid to state and local governments are all good things, and will have a salutary economic effect, too. 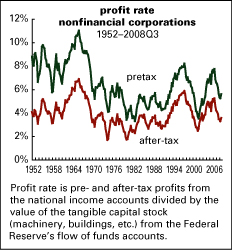 But there are some contradictions to consider, aside from personnel vs. campaign slogans. One is financing. Almost everyone assumes that the U.S. will have little trouble raising hundreds of billions for its bailout and stimulus schemes. What if it finds selling all those bonds a little rough? Could the U.S. be someday perceived as a credit risk like Italy, only much bigger? Say this forces interest rates up—what would this do to the private economy, finanical and real? This is not likely to happen, but it’s not at all impossible.

And then there are the contradictions that credit resolved for a while. Much of the restoration in corporate profitability from the early 1980s through the late 1990s—a trend that sagged in the early 2000s, then returned, though not as magnificently as before—came from squeezing labor harder—wage cutting, union busting, outsourcing, and the rest of the familiar story. All this constrained purchasing power in an economy that thrives on mass consumption. What wage incomes couldn’t support got a lift from borrowing—credit cards first, then mortgages. The credit outlet is now shut, and will be for quite a while, forcing consumption to depend on wage income, which is shrinking. Capital will want to squeeze labor harder to restore profitability, but consumption won’t have credit to help it out.

You could argue that this is exactly what the U.S. needs in orthodox terms: to invest more and consume less.